Compassion is the radicalism of our time, – the Dalai Lama

As we look into the deep challenges of the day including inequalities of wealth and opportunity distribution caused by technology, and the disappearance of trust with all institutions –  we can be easily overwhelmed. These are really big problems. More alarming is that we are shortly bringing 3 – 4 billion new humans into this messy online, connected universe for the first time.

In thinking about this, two thoughts occur to me – on opposite sides of the spectrum.

The first comes from the excellent writings of Yuval Noah Harari in his book, “Homo Deus: A Brief History of Tomorrow”.  As the author looks into the fundamental questions of our current time and the future of humanity, he digs deeply into the very essence of what makes the human species so successful on this planet.

Over … 20,00 years human-kind moved from hunting mammoth with stone-tipped spears to exploring the solar system with spaceships not thanks to the evolution of more dextrous hands or bigger brains…Instead, the crucial factor in our conquest of the world was our ability to connect many humans to one another. Humans nowadays completely dominate the planet not because the individual human is far smarter or more nimble-fingered than the individual chimp but because Home Sapiens is the only species on Earth capable of co-operating flexible in large numbers…

Other writers have said as much.  While honey bees and massive, multi-million ant colonies all appear to co-operate in large numbers, Harari argues that they do so “inflexibly” – according to some ancient hard-wired evolutionary constructs.

Humans are unique because of their ability to flexibly connect. Our wiring up of the planet is – with this logic – precisely predictable.  If our own human evolutionary path enabled us to dominate the planet thus far, the Internet was entirely obvious.  Our “exploration” of the planet – while arguably for exploitation and power – was really just about communication and collaboration.

The first question then is, “Do we need to worry about it?  Will our new collective infrastructure simply evolve or does it need guidance and direction?”

I care about this because if the answer is to allow the human species to evolve “naturally”, my worry is that we are on a trajectory that will see our advancing technologies, inequalities causing further global divides. In other words, we might blow ourselves up before we can “evolve” enough.  That topic is the focus of my recently released book “Tip of the Spear: Our Species and Technology at a Crossroads” Here:

The second observation – and preoccupying my current work – is at the opposite end of communication scale: One to one.

We have spent the better part of the past two years studying and implementing a new innovation culture in our part of the world based on a book called the Rainforest: The Secret to Building the Next Silicon Valley.  The Rainforest spends a significant amount of time on the nature of Culture and Trust.  Extensive research from global innovation ecosystems told the original authors that individuals in an innovation ecosystem act in ways that traditional economists looking at complex economic systems failed to adequately pick up. They discovered that the “actors” in an innovation ecosystem do not behave in typical ways.  Most economic models think about individuals as behaving rationally to maximize individual return on investment.  Whereas the successful Innovation Rainforest is populated by individuals who frequently exhibit activities and behaviours that maximize return on involvement. A new type of “ROI”

As the authors note,

“Almost anyone in a Rainforest who has started a company has witnessed this New ROI firsthand.  It is the successful entrepreneur who provides you with an hour of free advice. It is the advisor who drafts up a three-page strategic plan for you, completely on his own initiative and with no expectations. It is the engineer who starts working on your software project without knowing what her actual pay is going to be.”

This behaviour is a critical aspect of what makes innovation ecosystems thrive and is a huge clue as to how we need to reshape our one-on-one behaviors in this new world. One of the most important tools the authors discuss is the concept of the Social Contract.  Again from the book,

Whereas social contracts in our ordinary lives are implied and invisible, we seek to make Social Contracts for the Rainforest manifest and visible. These contracts are physical documents that attempt to manifest the Rules of the Rainforest, as applied to local circumstances. They are like written constitutions for innovation ecosystems: they provide maps for people to navigate the informal rules of their new communities. As in cognitive behavioral therapy, Social Contracts work by making people more self-aware and conscious of their choices for action.

In Alberta, we created our own version of the Social Contract and it read as follows: 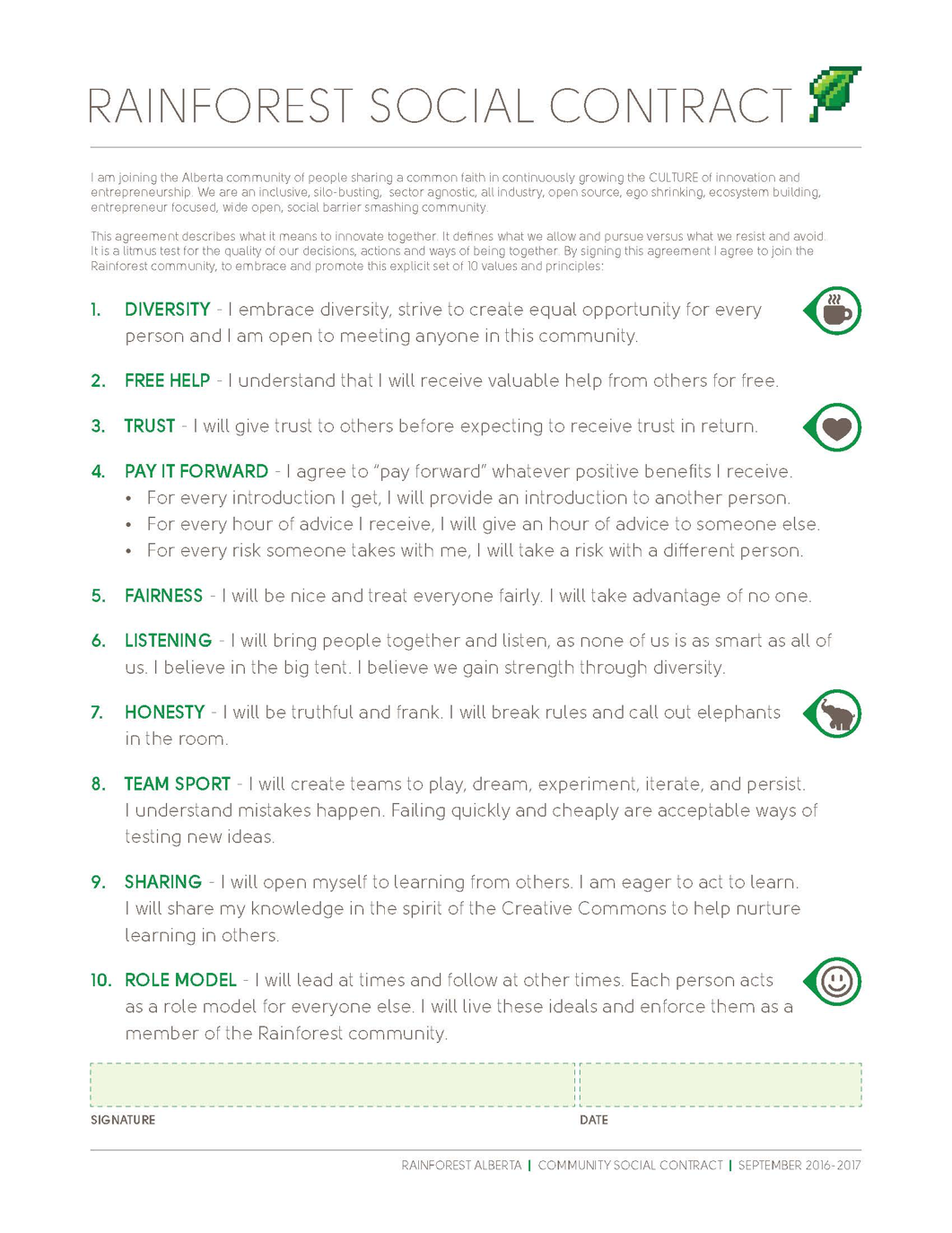 Why does this matter? Simply stated, because it fundamentally changes behaviours of individuals – One-on-one – the sum of which makes up our complex world.

If you read the Social Contract carefully you will see an explicit set of behaviours that CATEGORICALLY is in opposition to the zero-sum game of hardcore, winner-take-all, market-only capitalism.

But most importantly, it makes explicit a set of commitments to which signatories are bound.  It is as though we are able to create a constitution for each of us on how we wish to behave and the behaviour of all actors in the ecosystem.

Coming back to Harari, if we are collectively successful as a species because we have found the secret sauce of flexible collaboration, my experience in Alberta has given me a clue as to the new operating guide for this connected planet system.  Clearly, we need to create a culture of innovation if we are going to survive, but it begins with the culture of trust.

If I imagined a New Social Contract guiding, for example, the challenges of our new social media globally connected system, how might that look? Imagine if we could wipe the slate clean.  What if our exponential technologies could help us implement a global social contract that made explicit what we are trying to accomplish? What if this started not as a global collective but as a simple agreement between two people agreeing on how to behave.  How to act. Simple human behaviours, coded and amplified. What would this new social contract look like? Try this:

Now, I know many of you are saying how can you engineer this change globally and aren’t there simply too many negative people in the world who overwhelm this?

Perhaps, but imagine if our newest technologies and intelligence could help encode the social network “social contract” into existing (or new) applications, or develop new user interfaces that help us to encourage debate, discourse, disagreement within the constructs of individual social contracts.

Don and Alex Tapscott noted in their May 2016 book, “The Blockchain Revolution: How the Technology Behind Bitcoin is Changing Money, Business, and the World”, the promise of the Blockchain is well beyond finance. It is about creating irrevocable, mobile, global trust in anything of value. What happens if that “value” was a social contract between two people or among millions?

Hey Facebook, here’s a thought: The promise of a new digitally consumable social contract might, for example, change the very nature of signing up new friends. The acceptance of a friend becomes the acceptance of an explicit Social Contract between two people, a group of people etc. Instead of some complex and opaque “terms of use agreement” with Facebook, perhaps they should create a simple, human understandable, digitally accessible social contract that simply asks two ‘friends’ if they wish to adhere to it.  Think of what that might do to organizational trust?

Surely our new tools of Blockchain ledgers, machine learning, language processing, artificial intelligence, neural networks, user interfaces etc could be put to use to build such a system? My optimistic side says I am sure it is being built as we enter this challenging world of 2018 at the dawn of a low-trust, Post-Fact world.

Get the book at jimagibson.com (and tell your friends!)

Be the first to get the latest Tip of The Spear updates, right to your inbox. We’ll never spam you.