Strategy is Hard. Tactics are {Easier}

On Reading and Writing.

I have always loved roundabouts – traffic circles – or whatever name you give to those delightful road configurations that move traffic in most parts of the world except North America. I could never figure out why I liked them so much until I starting writing my book about the new intersections of science, technology, culture and the world in general.

Intersections are exciting for me because as someone once said, “… the action most worth watching is not at the center of things but where edges meet … roads, shorelines, weather fronts, international borders …”

But the roundabout is a different kind of intersection, isn’t it?  It is fluid, it is highly evolved and most importantly it requires a skill level that lifts the driver beyond the ordinary.  We must pay attention as the interactions of the drivers are entirely mutually dependent.  It ONLY works if the rules are obeyed and people pay attention.  It is efficient and sometimes {often} messy.

It is collaborative.   A traffic LIGHT is not.  A stop sign is not. Simple binary rules – go or stop. 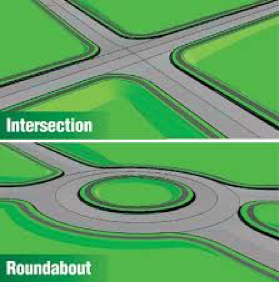 But a roundabout!!  Anticipate, weave, integrate, go, left check, right check, exit. Always some uncertainty about the outcome.  And the best is the first time in a complex urban roundabout (think London or Paris). Even better when driving on the opposite side of the road.

My first roundabout was in Adelaide, Australia after spending 4 hours in the Barossa wine country with a manual shift, driving on the opposite of the car and road.  It was awesome!!  That I am alive today –  we will leave that for another day.

As we think of the future where incredible intersections of all forms of human knowledge will begin to solve the really hard problems, I am thinking that it will look and feel much more like roundabouts than the traditional two-line affair.

I am paying attention!

Be the first to get the latest Tip of The Spear updates, right to your inbox. We’ll never spam you.